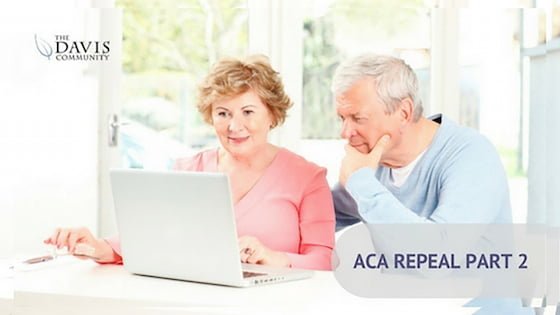 After a brief hiatus, The American Healthcare Act (AHCA) is back on the table. Having passed in the House of Representatives, it is now awaiting a vote by the Senate. Many people are anxiously following these developments and anticipating the effects that it may have on their own healthcare. If you or someone you love is among the senior population, you may be wondering where you fit in to the proposed healthcare changes.

The new healthcare bill stands to have a significant impact for seniors, especially those who fall into one of three groups: those not quite old enough for Medicare, those who receive Medicaid, and those with preexisting conditions.

Older Adults Not on Medicare

Most seniors can begin receiving Medicare benefits when they turn 65. Before that time, they may have health insurance benefits through an employer, or they may be responsible for their own insurance — especially if they’ve chosen to retire a few years early.

This could add up to substantial costs for older adults who are responsible for their own health insurance. For example, premiums for people over 60 would increase by about 22%, or an average of $3,192 per year (or $266 each month).

The AHCA plans to repeal Medicaid expansion and make major cuts to the Medicaid budget. This has the potential to affect seniors who rely on Medicaid to pay for long term care.

As a rule, Medicare does not cover long-term care, either in the home or in a residential facility. Seniors who have exhausted their savings and who cannot pay for long-term care by any other means frequently rely on Medicaid. Nearly two-thirds of nursing home residents receive Medicaid to help pay for at least part of their care.

With cuts to Medicaid on the federal level, states will have to decide how to compensate. Possible options affecting those in need of long term care include:

Seniors and others who currently receive services under ACA Medicare expansion will not lose those services as long as their coverage does not lapse.

If a person’s health insurance lapses for over two months, he or she could be required to pay significantly higher premiums for a year before being allowed to gain coverage again at the standard community rate. This could potentially make health insurance unattainable for many people just when they need it the most.

In order to counteract the effect of the higher cost of insurance for these people, it has been suggested that high risk pools be established both at the state and federal level to help lower the out-of-pocket cost of their premiums.

If you or loved one are no longer capable of living a safe, independent lifestyle, then call the Davis Community today at 910-686-7195 or simply complete and submit our online information request form. We provide exceptional assisted living and skilled nursing services in Wilmington, NC with a strong and supportive environment where your loved one will feel welcomed and part of an active community. Get to know the difference today — schedule a visit to the Davis Community!

Join Connections, our community outreach program to receive updates on the latest industry news and events in the area.

You have Successfully Subscribed!